“Suicide is so selfish.” “If he loved you so much why did he hurt you this way?” “Pray for your son so he can get out of purgatory.” “There will always be something unacceptable about the freely-chosen death of a loved one.” “Why did he do it?” “Did he leave a suicide note?” “He took the easy way out.” “Did you communicate with your son?”

Because of such remarks, suicide survivors constantly feel pain because uninformed people and their comments frequently reopen the survivors’ wounds. 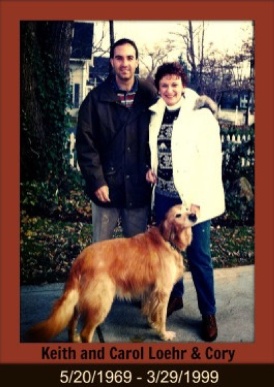 Most people do not realize that survivors of suicide are constantly faced with insensitive, hurtful comments about suicide, not only from the general population, but also from the media—and even the “entertainment” industry! Thoughtless comments from strangers are one thing, but suicide survivors also endure such comments from their clergy, family, friends, and other well-meaning people.

As a survivor of suicide, I have reflected on my grieving since my son Keith died “by suicide.” I decided to take a look at the process I have gone through, and I have tried to analyze my feelings. First, I decided to make a list of all the thoughts, feelings, and emotions I had after Keith died; I hoped this list would somehow help other “new” suicide survivors. After looking at the list, I realized the one thing that was most apparent was my anger. No—not the anger some say they feel after a death by suicide—but the anger that I felt about the word, “suicide,” and the phrase “committed suicide.” I felt anger because so many people make off-handed, hurtful remarks about suicide. I felt anger because mental illness continues to carry the burden of false stereotypes, and I felt anger because others had not been educated in ways to support suicide survivors.

Dealing with grief is always a very difficult process; dealing with a death by suicide is not only difficult but much more complex.

My son, Keith, died of untreated depression, an illness caused by an imbalance of certain chemicals in the brain. It was just like any other illness, but my son’s illness carried the stigma of a “mental” illness. Others who have helped me through this process refer to it as a “neurological” illness; I, too, prefer this latter terminology because it can help eliminate that image of someone in a straight jacket being taken away to a padded cell. This image and other negative stereotypes prevent those needing help from seeking it, and we must not let this continue!

After Keith’s death, I researched and read everything I possibly could about suicide. I came to the realization that he had suffered from a neurological illness so intense and overwhelming that Keith just could not escape the pain. Depression can cause immense suffering! When one suffers from depression, it prevents him or her from being able to look forward to anything. The depressed can only think about NOW and have lost the ability to envision a future devoid of pain.

Many times the depressed do not even realize they are suffering from a treatable illness, and they feel they cannot be helped. In fact, seeking help may not even enter their minds. They cannot think of the people around them, their families, or friends because of their illness; they are too consumed with emotional, and often, physical pain that becomes unbearable. They feel hopeless and helpless. They don’t want to die, but it’s the only way they feel their pain will end. There is no choice involved in suicide—it is a non-rational reaction to agonizing pain. Most of us occasionally have the “blues” but chronic depression is different. It is a biological illness.

However, when someone asks, “How did your son die?” I know silence will always follow my answer. It is a silence I have learned to expect. The silence of how to politely end the subject. I call this silence a part of discrimination. Discrimination in that the person has already decided in their mind that this death is not acceptable because it is self-inflicted. However, they are uneducated about depression and that lack of knowledge causes discrimination to continue.

In their mind, suicide occurred because of weakness or lack of character. They do not understand that a neurological illness is an illness just like any other illness.

I was brought up in the Catholic Church. When I first learned of Keith’s death, my thought processes immediately went to God. I was being punished. I wasn’t a good enough mother. Where would I take my grief? I always felt that the priest in our parish would have the right words because he represented a man of God. It started with that first night when my husband and I wanted a priest to comfort us after the police told us our son was dead.

Apparently, the church had not trained our priest in regards to suicide because he said nothing. The silence made us feel uneasy as if there was something he wanted to say, but didn’t. It was hurtful to us because we felt the church should be there for us with the information we so desperately needed. Wouldn’t God reach out to those who suffered? However, it was that silence that I will never forget.

I have had so many people contact me through my website, The Gift of Keith. The following words often appear at the very end of their messages: “I pray that God will forgive me.” I understand why they are using those words; we do nothing to help those survivors feel that their God is a loving God. He will take the souls of those who have taken their own lives, and he will welcome them into His loving arms.

Grieving parents need reassurance that each person they meet will embrace them with kind and loving thoughts and words. Yet, when some people learn about my son’s death by suicide, they respond with comments such as, “Oh, that is the worst kind of death!” I want to reply that death is death—why do they believe there is a “worst kind of death?”

Yes, I have probably heard them all; the list goes on and on. People make comments to grieving suicide survivors that they would never think of making to others who mourn for a loved one. I think of those who have faced death by cancer, heart attacks, car accidents, plane crashes, or any other type of death. Would you make comments that hurt the grieving family?

Committed Suicide. I hear that phrase used so frequently. What choice would I have? As a suicide survivor, those words cause me great pain. I have tried to make others understand that the word “committed” was used during the Middle Ages because suicide was then considered illegal and sinful. Today, we know more about neurological disorders. We know that neurological disorders can lead to suicide. So why do many people continue to use such outdated terminology? You might ask, “So what’s the big deal?” Well, the big deal is that every time a suicide survivor hears that word, they think of the meaning carried over from the Middle Ages, and it causes pain.

Let’s come out of the Dark Ages and remember that cancer kills, but so does an untreated neurological disorder.

I am tired of being angry at the word suicide, but you can help. Every time you hear about a death by suicide, you can remember that this death was the result of a neurological disorder. Something went wrong with the functioning of the brain, and as a result, a suicide occurred. Then, talk to God and ask Him to help others understand that our loved ones fought losing battles against an illness. I am not worried about how God feels; in my heart, I know. Unfortunately, most people misunderstand suicide, so the myths are perpetuated. I just want people to educate themselves and others about this word—suicide. To educate means to erase the stigma of the word suicide. Education can lead to better understanding, greater willingness to seek treatments and compassion for survivors. Unfortunately, my understanding of the word, SUICIDE, came in the most devastating way, through the loss of a son. 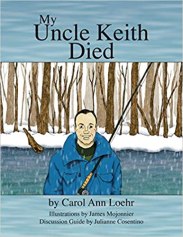 About the Author: Carol is the Webmaster of My Uncle Keith Died Facebook Page. Her book, My Uncle Keith Died, is a children’s book, recommended by the American Foundation for Suicide Prevention and the National Alliance on Mental Illness (NAMI). Written in clear, simple language easily understood by children, this book offers hope and practical ways to explain suicide to children. It explains the difference between sadness and depression and describes how chemical imbalances in the brain cause illnesses that can result in suicide. Carol makes her email accessible to those who grieve the death of a loved one to suicide. alosssogreat@aol.com

Lessons for Coping with Loss and Grief